Home News Barcelona In Chaos As Board FAIL To Agree Pay-Cuts With First Team...

Barcelona’s desperate attempts to shave £170million off their budget have been frustrated after the board failed to agree pay-cuts with players. 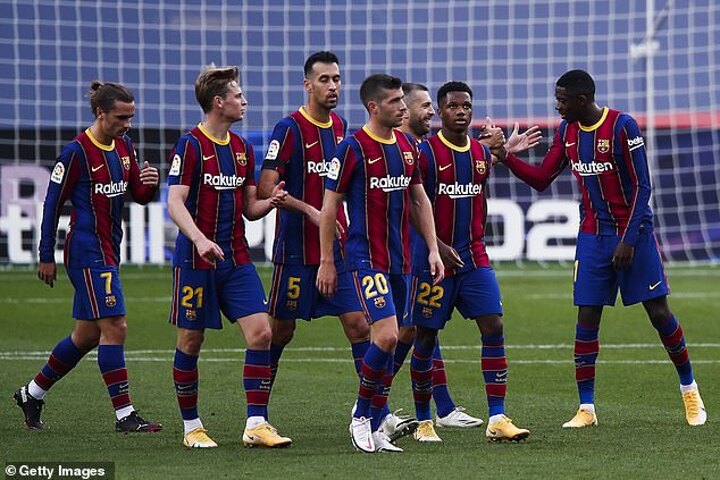 The LaLiga side are seeking to slash first team wages by 30 per cent to stave off fears of bankruptcy but have made no progress with Lionel Messi and Co despite ‘several days of intense meetings’, they revealed on Wednesday.

A statement read: ‘Today, November 11, after several days of intense meetings, and the negotiation was exhausted, the parties have ended the consultation period, without reaching an agreement.’

Barcelona have been ravaged by the coronavirus pandemic and have seen their finances take a major hit.

Players’ wages ate up around 61 per cent of the club’s £940m revenue before the Covid-19 crisis, with captain Messi the current highest earner at the club as he pockets around £500,000 per week (£26m per year).

The statement detailed that while current negotiations have been ‘exhausted’, both sides have agreed an extension to the deadline, running until November 23.

‘Given that the negotiating process has shown the sincere and firm will of the parties to understand, including the formula for full recovery of wages to be postponed, and many of the difficulties that seemed days ago have been overcome,’ the statement continued.

Read Also  Here Are The Names Of Presidential Candidates For 2020

‘The parties have agreed to grant themselves a deadline of November 23, in order to reflect and decide whether the approaches that have remained on the table can still be accepted.’

President of the Spanish players union (AFE) David Aganzo travelled to Barcelona to meet with the first-team and interim president Carles Tusquets to discuss the situation.

The playing squad are said to be sensitive to the club’s cash-flow problem, and there is confidence that an agreement will be reached even with the process ‘exhausted’ at this stage.

Barca’s £940m income has dropped to £746m amid the pandemic, and salaries will become over 80 per cent of total revenue if changes are not made.

The club sold Luis Suárez, Ivan Rakitic and Arturo Vidal in the summer in a bid to shift some of the veteran big earners in the dressing room.

If Barcelona’s playing staff do not agree to cuts then the board would be forced into unilaterally reducing their income.

But unilateral cuts present their own problems.

They would cause an unsavoury backlash and the AFE has already indicated that if that was to happen, then the players would be released from their contracts.

In part of their statement released last month, the AFE wrote: ‘The club cannot fail to be aware that this process, if carried out in the terms set forth, will entail a more than secure challenge to the measures that are finally adopted, with a high risk of nullity, and the automatic right to indemnified termination of the employment contract of the affected workers, by virtue of the application of article 41 ET itself.

Read Also  Barcelona To Slash Salaries Due To COVID-19 Losses

‘We believe that the club must be frank with its members and assume before them that these measures will lead to a very significant loss of FC Barcelona’s assets.’

Finances have troubled the Catalan giants for most of the year and it remains a real concern that they still do not have a lid on their operational costs.

Earlier in the year, Barcelona’s senior players took a string of pay-cuts in line with the club’s battling against the crushing effects of the coronavirus pandemic.

Players took a 70 per cent pay-cut back in March to ensure non-playing staff received all of their wages with the pandemic shutting down the sport.

Ronald Koeman’s side now sit eighth in LaLiga, nine points adrift of table-topping Real Sociedad. They have two games in hand on the San Sebastien side.