The German winger, 24, put pen to paper on a five-year deal with the Bundesliga champions, keeping him at the club until June 2025.

After sealing his move, Sane told Bayern’s official website: ‘FC Bayern is a great club with big goals – and these goals suit me as well. I’m looking forward to the new challenge and can’t wait to train with the team.

‘I know Hansi Flick from the U21 national team, we had a very good relationship there. I want to win as many trophies as possible with Bayern, and the Champions League is the top priority.’

Thanking City fans for their support following his move, he said: ‘Thanks so much for the great time and all the support over the last 4 years. It has been a really intense and successful time which I surely won’t forget. We won many games, scored a ton of goals, broke a couple of records and celebrated 7 trophies together. 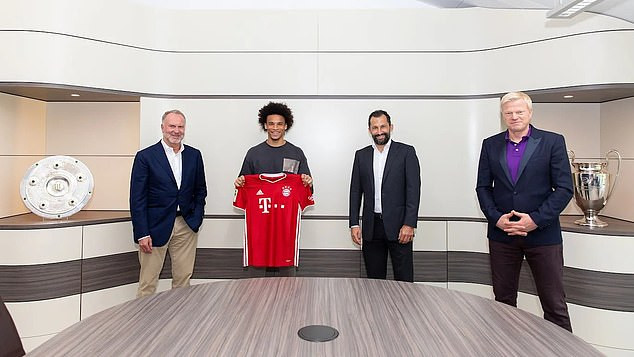 ‘Thanks to all the fans, to the staff and to my team-mates! I will always remember this time with great joy and pride. Also thanks to my coach who has made me a better player and has a large share of my PFA Young Player of the Year award 2018. I’ve learned a lot and I’m very proud to have been part of this journey.’

Bayern CEO Karl-Heinz Rummenigge added that he was delighted to finally welcome Sane to the Allianz Arena.

He added: ‘We’re very happy to welcome Leroy Sane to FC Bayern. He is an outstanding player who has proven his qualities over the past few years, especially in the national team.

‘Our goal is to gather the best German players at FC Bayern and the signing of Leroy emphasises this goal. I would like to congratulate Hasan Salihamidzic on successfully concluding the transfer.’

Sane joined City from Schalke in 2016 for £37m and won two Premier League titles, the FA Cup and two League Cups. He made 192 appearances for City and scored 52 goals for the club in all competitions.