The female student of Babcock University who went viral last year after appearing in a sex tape, has been offered an international scholarship.

If you recall, the student was expelled by the managemnet of the school after a video showing her and an ex-student of the school having sex surfaced on the internet.

According to a Nigerian medical doctor, Dr Ola Brown who took interest in the case after her expulsion from Babcock University, her scholarship in a foreign country has been fully paid.

He took to Twitter to break the news, which served as a follow up to an update he made on the student in June.

READ  Cardi B Reportedly Files For Divorce From Offset

Just made her scholarship payment. She will be travelling out to study in the next few months. Future head of the IMF/World Bank loading by God’s grace 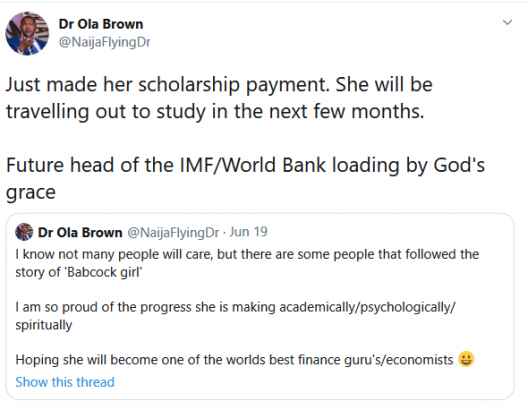 In the previous month, Dr Ola had written on the progress the lady has been making since some Nigerians came to her rescue. He disclosed that since her expulsion from the school, she has improved drastically, both academically and psychologically.

He wrote at the time: 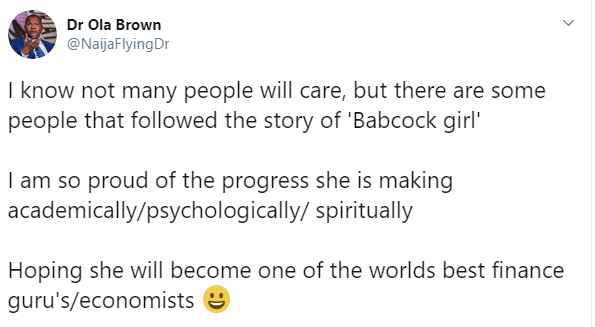 “I know not many people will care, but there are some people that followed the story of ‘Babcock girl’ I am so proud of the progress she is making academically/psychologically/ spiritually Hoping she will become one of the worlds best finance guru’s/economists

Everytime she calls she has some new insight about the wonderful world of finance/accounting/economics. She is smart, passionate & focused. She reads widely and deeply. She understands complex topics easily. I see her at the IMF/AFDB or some other global finance institution

She will NOT be defined by the manner in which her privacy was violated by someone she trusted.”