France suffered their first defeat since June 2019 as Finland pulled off a surprise win thanks to goals from two 21-year-old debutants. 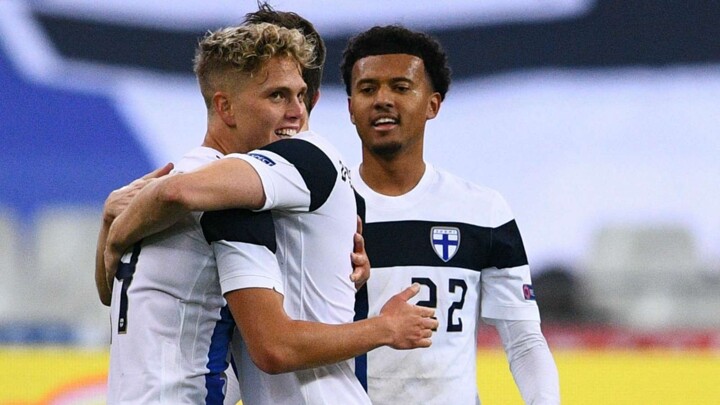 A much-changed Les Bleus side made a promising start, but 21-year-olds Forss and Valakari struck in the space of three first-half minutes to put Finland in command at the Stade de France on Wednesday.

France debutant Marcus Thuram struck the crossbar before Forss opened the scoring, but the world champions were toothless ahead of their Nations League encounters with Portugal and Sweden.

Finland, who also rung the changes, were solid after rocking Didier Deschamps’ side with those two first-half goals from out of the blue and famously secured their first win over France, whose previous defeat came against Turkey in June 2019.

Thuram made a lively start on the left flank and almost opened the scoring when he rose high to head Lucas Digne’s corner against the crossbar 15 minutes in, before volleying over unmarked from just eight yards out.

France were dominant but Finland took the lead against the run of play just before the half-hour mark, Forss driving into the penalty area to fire home with his left foot after Rasmus Karjalainen dispossessed Moussa Sissoko.

Things quickly went from bad to worse for Les Bleus, with Valakari cutting inside onto his left foot and picking his spot in the top-left corner with a stunning strike from around 20 yards out.

Finland were brimming with confidence and Steve Mandanda had to be alert to keep out Joni Kauko’s effort with his feet early in the second half.

Antoine Griezmann, Anthony Martial and N’Golo Kante were introduced 12 minutes after the break, with Paul Pogba among the trio withdrawn, but France were running out of ideas.

Monaco full-back Ruben Aguilar made his debut off the bench and Griezmann firing wide in stoppage time when he ought to have scored summed up a frustrating night for France.

#FixTheCountry: “We will mount the pressure, the fake promises will stop” – Yvonne Nelson

Just In: Many feared dead in Thursday morning fatal accident at Accra-Tema motorway

How Emelia Brobbey, Presec Old Boys and other rich men suprised Dr. Ofori Sarpong on his birthday at his office | Watch