Ghanaian actress Yvonne Nelson has made a statement about legendary rapper Obrafour which suggests a subtle jab at Sarkodie over the buzz surrounding his BET win.

Sarkodie is been lauded by Ghanaians after he won the Best International flow at the 2019 BET Hip Hop Awards.

Sarkodie has been praised by music lovers as well as some celebrities over his BET win.

Well, Yvonne Nelson who has proved to be an astute fan of Obrafour failed to congratulate the Sarkcess Music Boss but rather praised Obrafour for his immense contribution towards rap music in Ghana.

According to Yvonne Nelson, Obrafour is the greatest of all time and that the new crop of rappers can attest to that.

This assertion has come at the time Sarkodie is being hailed for his BET win and suggests that Obrafour should be hailed more often for paving the way for the likes of Sarkodie and other rappers.

“Do you guys even understand how BIG @iamobrafour is???? And what he’s done for hiplife and music in ghana???. He’s the GREATEST of all time!!!!! Go ask your favourite rapper about him.” 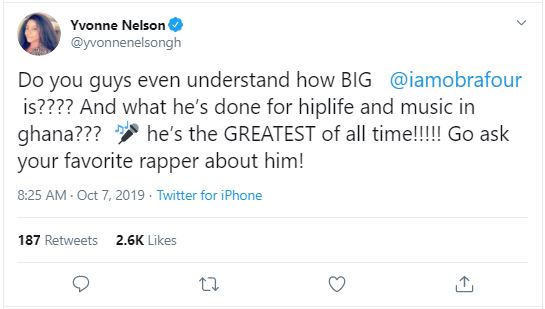