An emotional Lionel Messi says he did not want to leave Barcelona but that a move to Paris Saint-Germain is not confirmed. 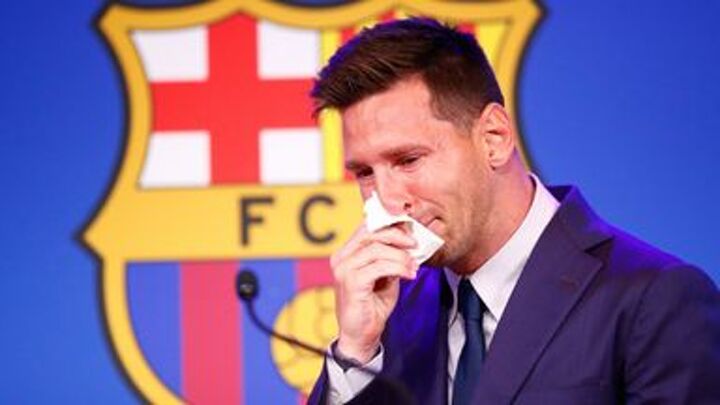 Messi was in tears as he received a standing ovation in his final Barcelona press conference, after 21 years with the club.

He confirmed he offered to reduce his Barcelona wages by 50 per cent.

“I did everything possible and the club, Laporta, they couldn’t do it because of La Liga,” said Messi.

He added: “I’m not ready for this. And honesty, with all the nonsense with the burofax, I was convinced of what I wanted to say.

“We thought we would be staying in Barcelona. The time we have had here has been amazing.”

Messi has spoken directly with Paris Saint-Germain head coach Mauricio Pochettino as he moves closer to joining the French club after leaving Barcelona.

PSG are expected to offer Messi a two-year deal next week, worth £25m a year after tax with the option of a further year. The 34-year-old and his father Jorge are braced for the arrival of the offer this weekend.

Asked if a move to PSG will be his next move, Messi said: “That is one possibility, to reach those heights.

“I’ve got nothing confirmed with anybody. I had a lot of calls, a lot of interested clubs. At the moment, nothing is closed, but we are talking about a lot of things.”

Steve Bruce has left Newcastle United just days after his 1000th game as a manager and not long after the club was taken over in...

A Manchester City fan is currently  fighting for his life after an attack by Club Brugge fans following Tuesday night's Champions League clash. The 63-year-old Belgian, who...

Steve Bruce has finally been sacked as head coach of Newcastle United by their new Saudi-backed owners, nearly two weeks after they...

Real Madrid striker Karim Benzema goes on trial in France on Wednesday charged with complicity in the attempted blackmail of former international...

Cristiano Ronaldo has allegedly recommended Zinedine Zidane for the role of Manchester United manager as pressure on Ole Gunnar Solskjaer continues to...

Simeone handshake snub ‘not so cool’-Klopp