Piers called out the family after an unedited photo of Khloe was leaked and the Kardashian’s PR team requested the image be removed from all platforms.

Reacting to the photo, Piers said Khloe has “blown” the Kardashian family’s “scam” after her unedited bikini picture was leaked online.

The photo depicts Khloe in a leopard print bikini by the poolside. Her waist didn’t look as thin as it looks in the photos she shares herself. Her skin also didn’t look as smooth.

In his latest column for MailOnline, Piers said the sharing of the candid image would have “horrified” Khloe, claiming her other images have been heavily edited. 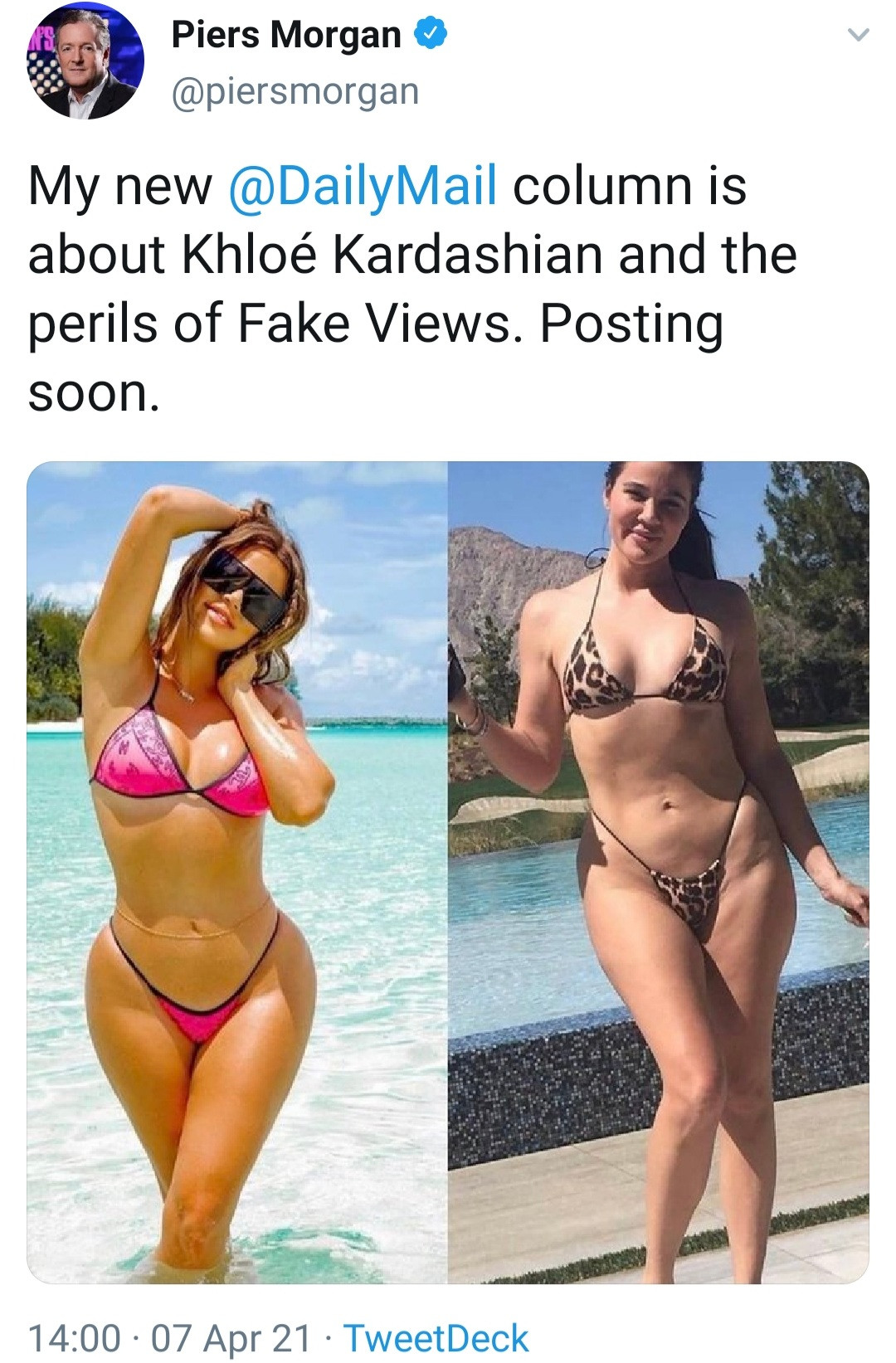 He added that the image “lays bare how her family have built a cynical multi-billion dollar empire from the exploitation of fake views.”

“The photo of Khloé Kardashian in a leopard print bikini that’s gone viral this week is truly jaw-dropping,” he wrote.

“Because it’s real. No filters, no airbrushing, little make-up, hair scraped back in a ponytail – just a picture of how Ms Kardashian actually looks.”

Piers then went to compare the image to the other bikini photos shared on her social media, saying “her waistline is significantly less defined, her curves less dramatic and her skin not so impossibly smooth”.

The English host suggested the picture was “refreshingly normal” compared to her other bikini photos, which he claimed were “substantially worked on”.

Piers added: “With one carelessly released genuine photo, the scam’s been blown.”

He went on to call the Kardashians “fame hungry” and “greedy” for setting fake and impossible beauty standards for women just to sell products.

Piers concluded that the “fakery matters” because of the unrealistic expectations that are set for “impressionable” young girls, leading to mind and body-altering severities.

Not to mention “huge mental health issues including anxiety, depression and worse.”

Khloe’s team requested the picture be taken down after it was posted online, explaining it had been shared with the public “unlawfully”.

Khloe’s grandmother MJ Shannon had taken the picture during a private family gathering and an assistant shared it online.

A statement from MJ’s legal representation read: “We are counsel for Mary Jo ‘MJ’ Shannon.

“Copies of a photograph, captured by our client, which captures her family member Khloé Kardashian in a private location (wearing a leopard print bikini), have been unlawfully posted online, without authorisation.”

In a separate statement, Tracy Romulus, chief marketing officer for KKW Brands, explained the picture had been posted by mistake.

She said: “The colour edited photo was taken of Khloé during a private family gathering and posted to social media without permission by mistake by an assistant.

“Khloé looks beautiful but it is within the right of the copyright owner to not want an image not intended to be published taken down.”

Akuapem Poloo finally speaks after she was convicted by the Court