Home Viral See This Family’s Reaction When Their Daughter Came Home Amid The Coronavirus...

A Twitter user took to the platform to share a video showing how her family welcomed her sister when she returned home.

In the video, as soon as the mother opened the gate for her daughter, she made sure some distance was between them, then she handed her wipes to clean her hands. Their father was close by and he also took wipes and used it to wipe down the gate their daughter might have touched, even though she told them she didn’t touch anything.

They also asked her to bring out her phone so it could be wiped down.

When they were done wiping her down, they allowed her go further into the compound, but not into the house. They then asked her to drop her bags outside for further cleaning. 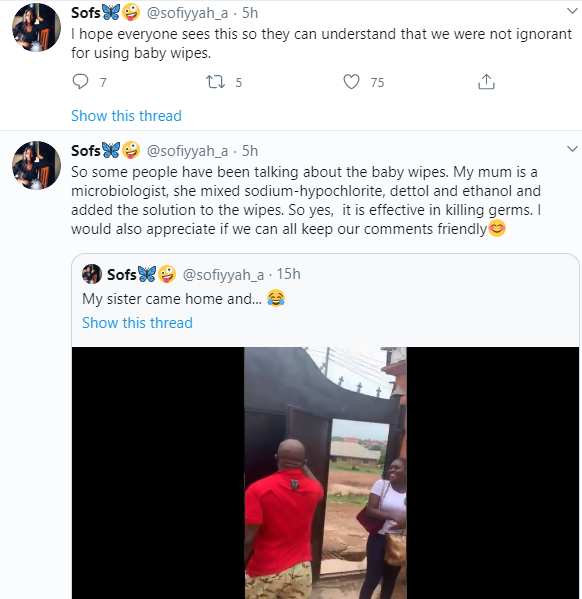 The Twitter user who shared the story revealed that her mum is a microbiologist and she mixed sodium-hypochlorite, Dettol and ethanol, and added the solution to the wipes to make it effective in killing germs.

ALSO READ  After Visiting My Wife In Her Office, I Notice My Kids Looks Exactly Like Her Colleague - Man Writes

Man Shares Disgusting Photos Of An Apartment A Landlord Is Renting For GH¢ 5,165 Yearly