Home General This Is What I Did To My Boyfriend Who Followed Me Not...

A young lady with the handle Money Magnet @ ScarletVirgin on Twitter has narrated what she did to her boyfriend back then in the university when he followed her without him knowing she was going to see another man.

According to her, the boyfriend followed her out of the school campus to where she was going, as he did not know she had an appointment with a man. When they got there, she told him to wait beside a house that she wanted to pick some things up from her female friend.

She went to the other guy’s house and switched off her phone so that he won’t be able to call her, and she started looking at him from a window wandering around the street. 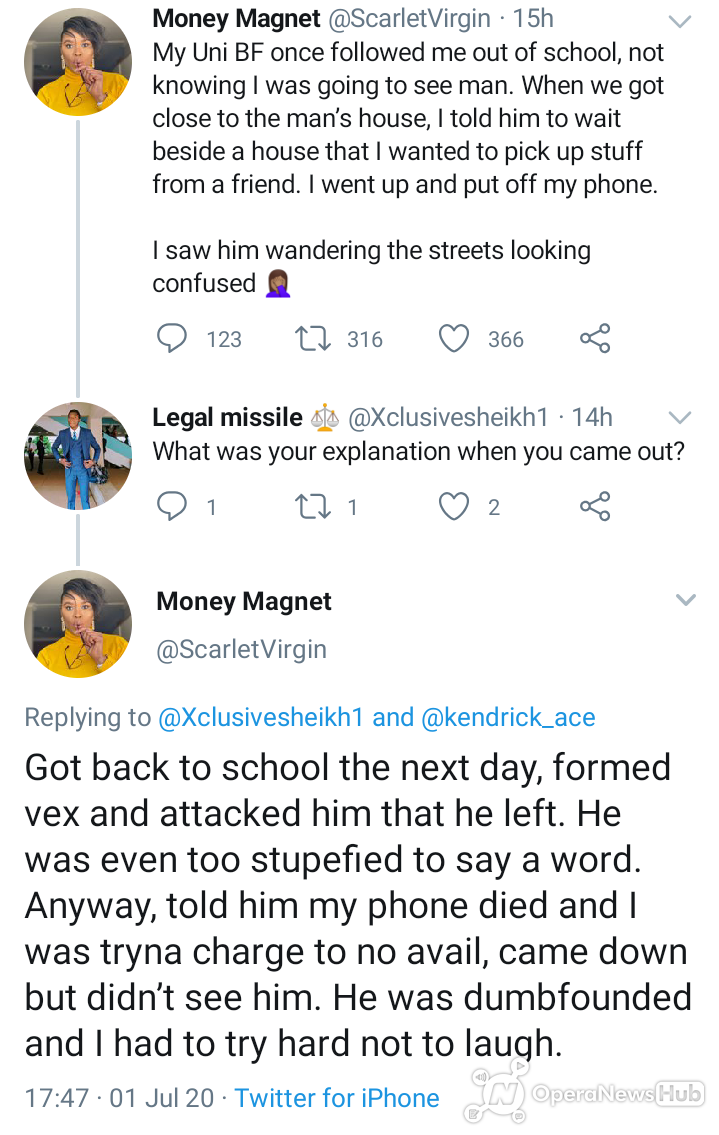 Mahama Promises To Create Over 100,000 Jobs With Tree Planting Program

Two Dead After ‘Galamsey’ Pit Caves In At Mpatuam

Lady Dies After Getting Burnt While Answering A Phone Call Close To A Gas...

Linda Bakiweyem - July 4, 2020 0
A lady has died after suffering severe burns while answering a call close to her cooking gas. Friends took to Facebook to share photos of...

I Was Raped At 17 but My Mother Refused To Take Legal Action –...

Isaac Brown-Yawson - July 9, 2020 0
Hajia, as she is simply called by friends, yesterday, on SVTV Africa, disclosed how she was raped at age 17, but her mother couldn’t...

Samuel Siaw - July 8, 2020 0
The National Communication Officer of the opposition National Democratic Congress (NDC), Sammy Gyamfi has dismissed reports that the Flagbearer of the party has tested...

Daniel Owusu - July 13, 2020 0
July is gradually getting 'old' and introducing us to a new month with a fresh begining. Meanwhile it has given us numerous news in...